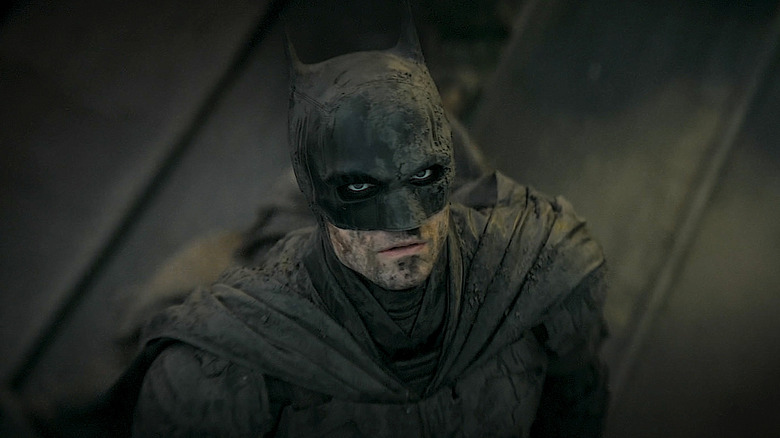 "The Batman" is an all-out effort to top Christopher Nolan's iconic "The Dark Knight," a producer on this 2022 reboot told Empire. Director Matt Reeves has created a deeply serious film noir detective story that takes more inspiration from David Fincher's grim 1995 masterpiece "Se7en" than from other Batman adaptations. It's a gritty serial killer thriller with The Riddler's gruesome machinations in place of Kevin Spacey's fanatical "John Doe."

But how on Earth does a famous billionaire order a Batmobile or a closet full of indestructible logo-emblazoned costumes without a massive supply chain catching on? Nolan's films dealt with this problem by outsourcing the gadgets to Morgan Freeman's Lucius Fox, but that was never totally satisfactory. Lucius didn't build that hover tank by himself, and a flying battleship suddenly deployed in a major American city might draw some attention. "The Batman" has a simple solution: low tech. For the most part, Reeves' excellent film strips down Batman's belt and emphasizes the hero's broad shoulders and clever mind. Still, this Batman utilizes a few classic toys. Here are all the true-to-life gadgets in "The Batman" ranked. 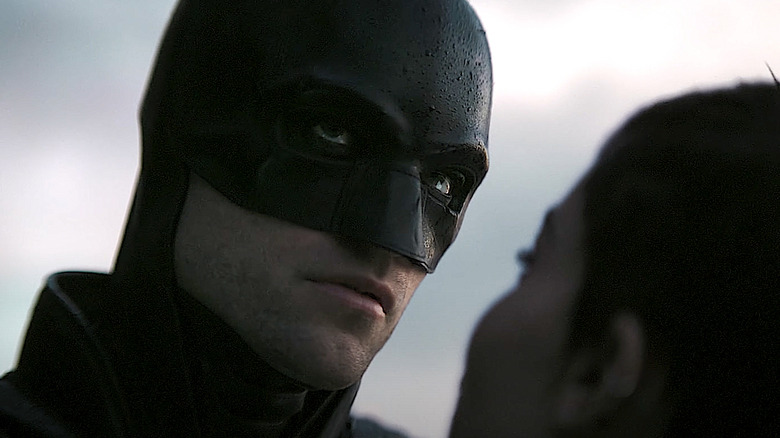 In previous iterations such as Christopher Nolan's 'The Dark Knight," the batsuit's cowl comes equipped with various visual-aid devices that can slide down over the Caped Crusader's eyes and enhance his stealthy tactical prowess.

In "The Batman," Robert Pattinson's crime-fighter wears a pair of contacts that act as believable low-resolution video cameras. Since this is a detective story foremost, Batman spends considerable time reviewing his footage from the film's first gruesome crime scene. This is a practical gadget. Director Matt Reeves' Dark Knight is an outlaw vigilante with a tense relationship with Gotham's corrupt police department. It's not like he can take crime scene photos, so the Go-Pro style footage comes in handy.

There's also a plot reason for the lenses not being attached to the cowl. At one point, Batman gives Selina Kyle (Zoë Kravitz), aka Catwoman, a pair of the covert contacts to spy on the mobsters and corrupt city officials who congregate in the club where she works as a cocktail waitress. Like everything else in Reeves' script, this tool is also reasonably plausible by 2022 standards. Refreshingly, there's no truly fake technology in the film. A version of these lenses is in development by both Google and Samsung. Neither has come to market as of the release of "The Batman," so for the slight sci-fi fib, this gadget gets last place. 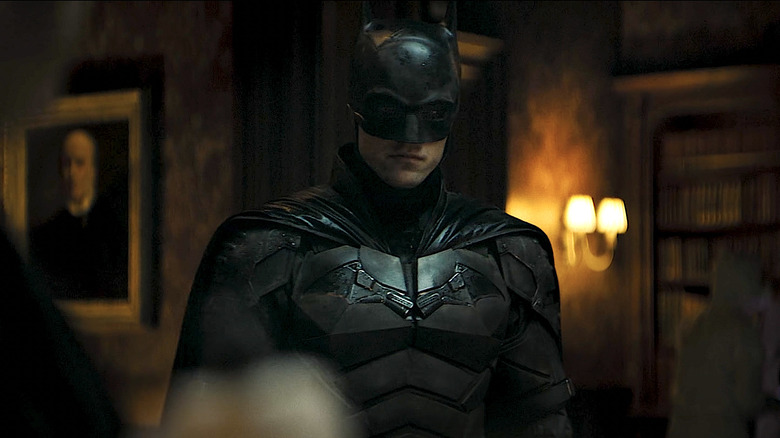 Everything in director Matt Reeves' "The Batman" is reimagined with simplicity, practicality, and elegant style. That includes the Batarang. The latest incarnation of the Caped Crusader's most consistent tool is a detachable insignia on Batman's chest.

"The Batman" and its gritty world-building needed a good reason for this attention-averse crime fighter to be walking around in an otherwise utilitarian costume with his logo emblazoned on the chest. Unlike other installments, there's no indication anyone other than Alfred is helping Robert Pattinson's Bruce Wayne pull off all this vigilante cosplay. Reeves's Batman has little more than a somewhat dingy workshop and appears to be doing the gadget engineering himself.

The new Batarang tool is deployed simply, too. Since this adaptation focuses on the detective aspect of the character, this particularly sharp-edged gadget is only used once, pulled out to cut some police tape at a crime scene. It's then popped right back in place. A GPS Batarang that somehow flies around the room taking out a batch of baddies has no place in this version of the universe. It's just another subtle detail that keeps Reeves' adaptation anchored in the grim reality on the ground in Gotham. 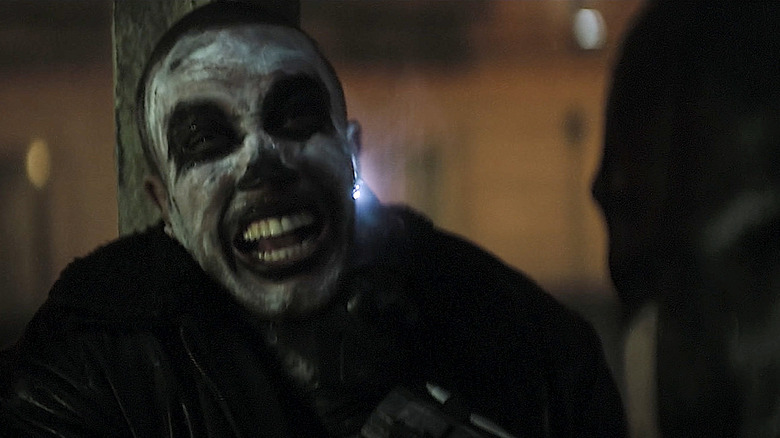 "The Batman" introduces us to the hero by cross-cutting between three different crimes underway in Gotham. Where exactly is he? The audience doesn't know but neither does Gotham's criminal element, and that's this Dark Knight's true power.

The capacity crowd I saw "The Batman" with in normally COVID-concerned Seattle cheered wildly when the Caped Crusader first emerges from the shadows. The Gotham City of writer-director Matt Reeves' imagination has devolved into debauchery. Gangs roam the streets, playing the ripped-from-the-headlines "knockout game" in which strangers are brutally assaulted for mere nihilistic thrills. When we see a group of street toughs in face paint stalking a young man as he gets off the subway, it's clear what they intend.

Batman's first hand-to-hand fight with one of these faceless thugs is a tone-setting act of brutality. Reeves' Batman is a punisher. He doesn't kill Gotham's cooks, but he dishes out the beatings of a lifetime. As the Dark Knight takes out these assailants, he quickly whips out a sleek high-voltage taser and jams it into the throat of one unlucky criminal. Like every other gadget in "The Batman," the tool's realism and ferocious simplicity get to the heart of the franchise's most seething Bruce Wayne yet.

The Batman's Grappling Hooks Are Things Of Beauty 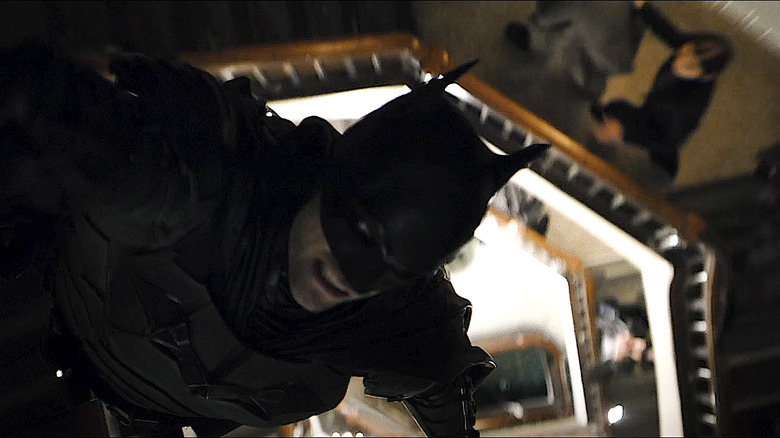 This incarnation of Batman still uses propulsive wires to navigate all the scenic obstacles in Gotham. At one point Robert Pattinson's Dark Knight fires up a classic grappling hook to pull himself into the fleeing Riddler's apartment. As in David Fincher's foundational text "Se7en," the Riddler's home is a disturbing hoarder's sanctuary, cluttered with twisted trophies and sordid schematics. The walls are even lined with coded notebooks (a nod to Fincher's "Zodiac") that provide a key to the killer's evil mind. Batman's tool to breach this location is just a cool way for this masked detective to be first on the scene — just like Brad Pitt was in the film's visual and tonal inspiration, "Se7en.

There are some death-defying grappling stunts, too. Batman casually uses a wire to run down the face of the building. In another hero moment, Batman escapes a precinct full of angry cops by rappelling up through a beautiful spiral staircase. It's an action sequence perfectly motivated by the plot, but you get the sense director Matt Reeves and his DP Fraser love this gadget mostly for the stunning visuals that are possible when the Caped Crusader takes flight.

The Batman's Batsuit Has A New Trick 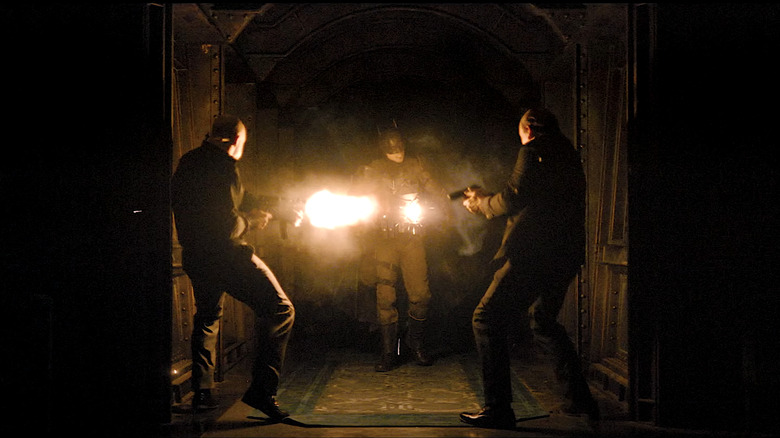 DC Universe colleagues Batman and Superman have a famous love-hate rivalry, but when it comes to which hero appears in better movies, there is no competition. Superman's god-like powers make him a bit dull. It's just hard to gin-up stakes in a story about an impenetrable deity. Conversely, Batman's Frank Miller-inspired emphasis on Bruce Wayne's fragility is always compelling. That's also meant an ever-changing batsuit protecting the corpus of our Caped Crusader.

The batsuit in Tim Burton's masterful 1989 "Batman" was so cumbersome Micheal Keaton famously couldn't even turn his head. To a point, Burton's armor was also bulletproof. "The Dark Knight" batsuit was bulletproof, too. However, Christopher Nolan's take emphasized the tradeoffs between heavy armor and free movement in the costume's joints.

"The Batman" ignores design debates while having the first big-screen batsuit that appears invulnerable to even automatic gunfire at close range. Yet, this fantastical detail is key to Robert Pattinson's gritty portrayal of the Caped Crusader. Director Matt Reeves' Batman calmly walks through a hail of bullets, emphasizing the brute force of this Dark Knight as vengeance personified. "The Batman" is also relentlessly neo-noir in style. There are several scenes in which the only source of light is a frenzy of muzzle flashes. Reeves' realistic Batman is well-armored because he doesn't have a slew of other silly gadgets to befuddle armed attackers. This stronger batsuit motivates some of the film's best visuals and makes possible this Dark Knight's blunt-force tactics.

The Batman Is Now A Flying Squirrel 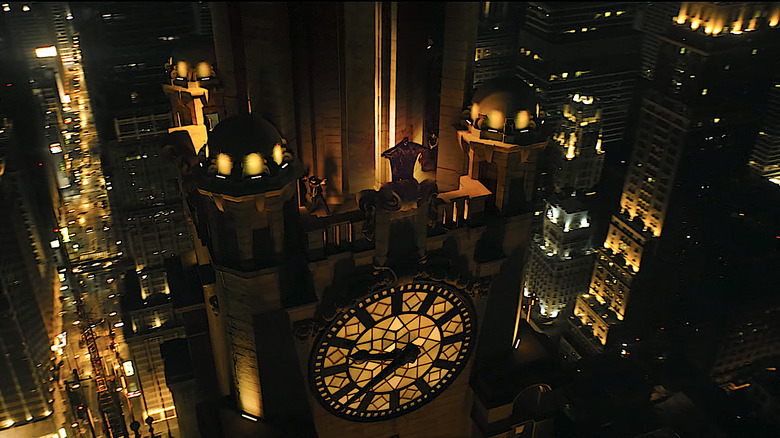 It takes a while in director Matt Reeves' inventive "The Batman" before we see how this Caped Crusader is going to handle a leap from tall buildings. Tim Burton's answer with "Batman" in 1989 was to use mystery and simply have Micheal Keaton vanish after leaping from impossible heights. This "hide-the-ball" tactic was probably a practical choice but also key to the character's allure in that fantastic early film.

Christopher Nolan went in the opposite direction. An electrified device of some sort morphs Batman's hanging cape into a rigid set of wings. It works in the film but only via the power of handwaving pseudoscience.

Reeves tops them all by making it clear his Batman can't fly. When a group of angry cops chases Robert Pattison's Dark Knight to the top of a building, he stumbles and nearly topples off the ledge. It's a small physical misstep from an otherwise unflappable character that further grounds "The Batman" in reality. Batman then takes a moment to somehow zip up his cape into a real-world, skydiving-inspired flying squirrel suit and dramatically glides off the building. Crucially, the descent is rapid, and as his parachute deploys, it's caught on an overpass and Batman takes a violent tumble to the street below. The scene is a perfect reminder that this Batman is very mortal, and all his derring-do comes with the very real threat of death. 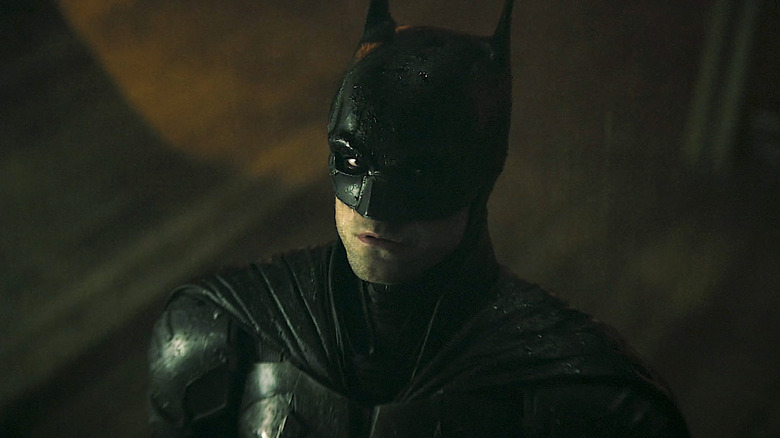 "Is Batman a drug addict?" asked my DC novice companion at the early preview screening of director Matt Reeves' "The Batman." This question had me puzzled at first, but it's not totally out of line. In the film's dramatic finale, Batman takes a shotgun blast to the chest and seems down for the count. But when Zoë Kravitz's Catwoman is in danger, the Dark Knight must rise again. Robert Pattinson's Caped Crusader whips out a potion mounted on his suit and jabs it into his body. He's instantly revived and gets back into the fight with fist-pounding fury.

"Was that Narcan?" my screening partner asked. Narcan is a drug that blocks the effects of opiates and can quickly bring overdose victims back from the brink of death. We had walked to the screening through downtown Seattle, and the ravages of the opiate epidemic were everywhere. Seattle's grim, Gothic architecture is accented with a mass human tragedy. Once bustling streets are now lined with unconscious bodies and flashing police lights. The adrenaline shot that gets Batman back into the fight has nothing to do with this reality, but Reeves' gritty film is full of clear economic and social observations about the human toll of urban decay. "The Batman" is committed to realism more than any film in the canon, and all its believable gadgets have taken thematic inspiration from grim reality.

The Batman's New Stripped-Down Batmobile Is A Beast 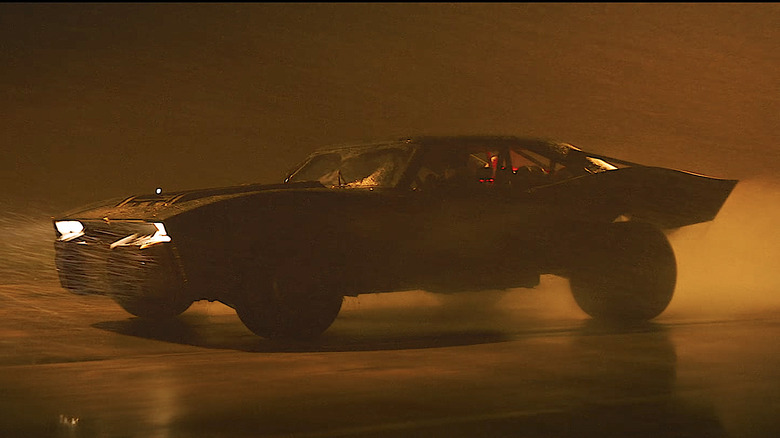 No bat-gadget makes fans drool more than an updated Batmobile. In 1989, Tim Burton's "Batman" went for the wow factor with a baroque vehicle every bit as gothic as the city around it.

The problem with this ostentatious automobile and the subsequent bulky tanks of Christopher Nolan's Batman universe is the fact they're just too cool. In the real world, Batman would draw so much rubbernecking attention with these flashy whips he'd never make it to a crime scene on time.

Director Matt Reeves' hyper-realistic script addresses this objection by having Robert Pattinson mostly cruising around Gotham on a nondescript dirt bike. However, in early scenes, we see there is, hidden beneath a tarp, a car clearly under construction in Batman's cave. This excellent teaser follows the logic of Chekhov's gun and foreshadows the best action sequence of the film in which the boxy 1970's-style muscle car finally bursts from the shadows for a fiery chase with the Penguin. The car is powered with a real Chevy V8 but was otherwise made custom for the film. According to production designer James Chinlund, the car's build was the first thing he talked about with Reeves. This fledgling Dark Knight is only in year two of his career, and this Batmobile needed to look like a car a gearhead Bruce Wayne could've plausibly put together himself.

Read this next: Batman Movies Ranked From Worst To Best

The post Every Gadget in The Batman Ranked Worst to Best appeared first on /Film.

84 Painfully Accurate Work Memes To Remind You They Definitely Don’t Pay You Enough
May 15, 2022