In the $62.5 billion-plus global sneaker market, the competition is fierce, the costs associated with the intensive research and development that goes into designing and manufacturing footwear are high, and the revenues that can be generated from single styles collections can race past the $1 billion mark for standouts like Nikes Flyknits or adidas Stan Smithand the Superstar models. This means that the stakes are high amongst the markets key players, and the chance that litigation will come into play among them is even higher.

Nike and adidas have long made headlines in connection with their history of legal battles, centering on their respective knitted technologies, for instance, which spawned an international battle beginning at the very same time as he London Olympics in 2012, and while there is likely no end in sight to the fights they wage against one another in their quest to outfit consumers across the globe, another rivalry has been spilling over into the courts: Nike versus Skechers.

In the lawsuit that it filed against Skechers in a federal court in California in September, Nike told the judge that the case was not the first of its kind, just as it was not the first time Skechers has infringed its intellectual property rights. Accusing Skechers of copying a number of its sneaker designs and thereby, infringing two of its utility patents, counsel for Nike declared that the case is actually the fourth in a series of lawsuits that Nike, and its subsidiary Converse Inc., have filed against Skechers asserting a range of intellectual property rights.

In filing suit against Skechers this fall, Nike has escalated another relatively recently-initiated fight against its Southern California-based rival, and added yet another matter to a larger and clearly still growing list of proceedings that Nike has said stem from Skechers larger pattern of allegedly copying its competitors designs and using innovative technologies developed by others to gain market share instead of innovating its own designs and technologies.

In Skechers mind, Nikes latest litigation was the latest attempt by the $150 billion-plus sportswear giant to stifle competition and bully its rivals. This is what Skechers asserted in an open letter that it posted to social media in the fall of 2019.

Nike-owned Converse sued Skechers (and 30 or so other companies, including New Balance, Walmart and Ralph Lauren, among others, in individual cases) in federal court in Brooklyn, New York in which it sought injunctive relief and monetary damages and in an International Trade Commission (ITC) proceeding, seeking an order barring the defendants from importing the allegedly infringing footwear into the U.S.

In both sets of cases, Converse alleged that the more than 2 dozen companies, including Skechers, were mass-producing, distributing or selling sneakers that knock off the look of [its] iconic Chuck Taylor, thereby running afoul of its trademark rights. As for Skechers, adidas claimed that the companys Twinkle Toes and BOBS designs infringed its trademark or more specifically, its trade dress rights in various elements that make up the design of its famed Chuck Taylor sneakers, from its distinctive toe caps and toe bumpers to its striped midsoles.

While the majority of the footwear companies on the opposite end of adidas civil suits and the ITC proceeding have settled quietly, the matters against Skechers are still underway.

In the patent infringement suit that it filed in federal court in Portland, Oregon in early 2016, Nike asserted that a number of Skechers footwear including its Burst, Womens Flex Appeal, Mens Flex Advantage, Girls Skech Appeal, and Boys Flex Advantage shoe styles infringe at least eight of its Flyknit-specific design patents given that the "overall appearance of the designs of the Nike patents and the corresponding designs of Skechers' infringing shoes are substantially the same.

According to its 14-page complaint, which was supplemented with nearly 200 pages of exhibits, counsel for Nike alleged that Skechers intended to copy the designs covered by [its] patents and did so to the point that an ordinary observer would will perceive the design of the two parties respective shoes to be the same. To prove its point, Nike cited an article from menswear site Complex, which describes the Skechers Burst shoes as having ripped off Nikes Flyknit design.

That case, which was transferred from a federal district court in Oregon to the U.S. District Court for the Central District of California in November 2017, is still underway, with Skechers filing its answer, as well as counterclaims of its own, early this year, asking the court to declare that it did not infringe Nikes patents, and to declare that 12 of Nikes patents are invalid for failing to comply with the patent law provisions of the Patent Act.

In the wake of Nikes design patent infringement lawsuit, Skechers retaliated against the Beaverton-based sportswear giant by filing inter partes review (IPR) petitions with the U.S. Patent Trial and Appeal Board (PTAB) in order to invalidate the eight design patents that Nike claims Skechers infringed in the aforementioned lawsuit. The basis for these filings? The individual patents do not meet the requirements for patentability (i.e., the inventions are not novel and/or non-obviousness).

In September and November 2016, the PTAB which has the ability to refuse to institute an IPR proceeding if it finds that the challengers request lacks substantive merit denied each of Skechers petitions, including one that pointed to Italian fashion brand Missonis zig-zag print designs, which date back to the 1950s, as existing long before Nike created its Flyknit designs and filed its corresponding patent applications, making it so that Nikes knit-centric creations are not all that novel. (Novelty is a critical requirement for patent protection).

This time around, while the PTAB again refused the majority of Skechers petitions, it agreed to consider two of them, both of focused on the validity of Nikes design patents for sneaker soles (D723,781 and D723,783). Skechers claimed that the two shoe sole patents were invalid because they were obvious as a result of Nikes own prior filings, including a European Community Design registration and two previously-filed utility patent applications. In June 2018, a 3-judge panel for the PTAB rejected Skechers invalidity challenges and upheld the validity of Nikes patents. 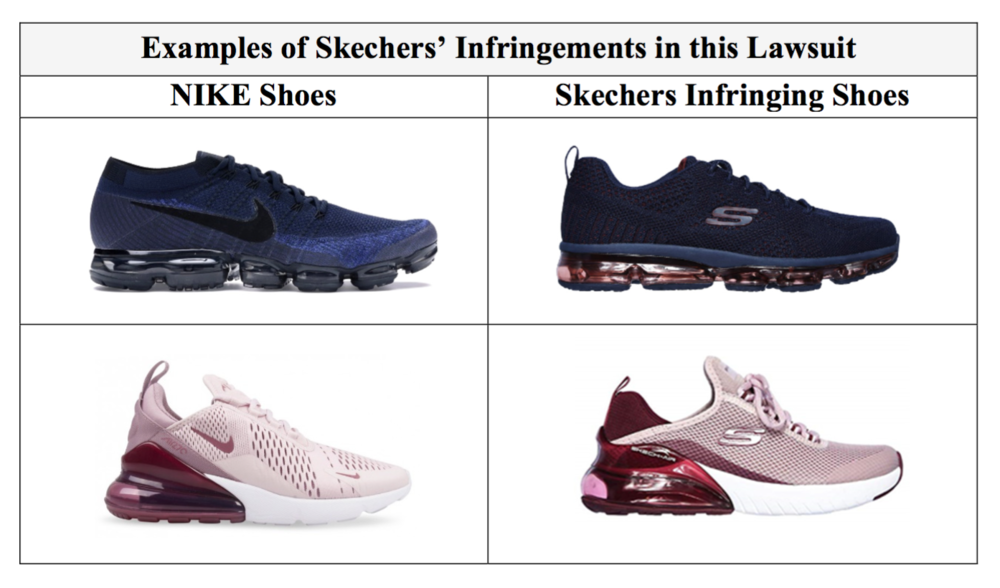 In a design patent infringement complaint filed in the fall, Nike upped the ante on the parties existing fight, and called foul on Skechers continued practice of allegedly manufacturing Skecherized versions of Nike sneakers, including blatant replicas of itsVaporMax and Air Max 270 designs,paying specific attention to its rivals alleged hijacking of its Air Sole technology, which Nike says that it spent decades creating.

According to its 37-page complaint, which was filed on September 30 in the U.S. District Court for the Central District of California, Nike alleges that in selling its Skech-Air Atlas, Skech-Air 92, Skech-Air Stratus, and the Skech-Air Blast models, among others, Skechers has made, used, offered for sale, sold, and/or imported into the U.S. shoes that have the same overall appearance [as those protected by its] VaporMax patents, and that infringe the some of the patents it holds for its Air Max 270 designs.

Skechers allegedly infringing sneakers are substantially the same as Nikes patent-protected sneakers, the footwear titan asserts, so much so that an ordinary observer will perceive the overall appearance of the VaporMax [and the Air Max 270] shoes and the corresponding designs of the [Skechers] shoes to be virtually the same.

In its January 7, 2020 response to Nikes suit, Skechers denies that it has infringed Nikes patents and asserts that even if it did, Nikes patents are invalid, and thus, unenforceable. In counterclaims of its own, Skechers is seeking a formal judgment from the court declaring that the patents that Nike cites in its complaint are invalid and that it has not infringed the patents at issue.

In a separate patent lawsuit that it filed against Skechers just weeks later, Nike claims that Skechers is also on the hook for infringing two of itsutility patents. According to Nike, SkechersSkech-Air Jumpin Dots and Skech-Air Mega shoes infringe claims contained in two of its utility patents one that protects an article of footwear with an emphasis on the cushioning cavity that exists in the midsole of the shoe (Patent No. 10,098,412), and another that covers the sole component [of a sneaker] and a method of manufacturing the sole component (Patent No. 7,401,420).

Without Nikes authorization, Skechers has made, used, offered for sale, sold, and/or imported into the U.S. shoes that infringe a number of claims protected by the 412 and 420 patents, according to Nike, as they include the same sole structure incorporating a fluid-filled bladder and a reinforcing structure secured to the bladder, a cavity disposed between the upper and the outsole, and a plurality of protrusions [that] progressively decrease in height from the first protrusion to the forward-most edge of the article of footwear, among other things.