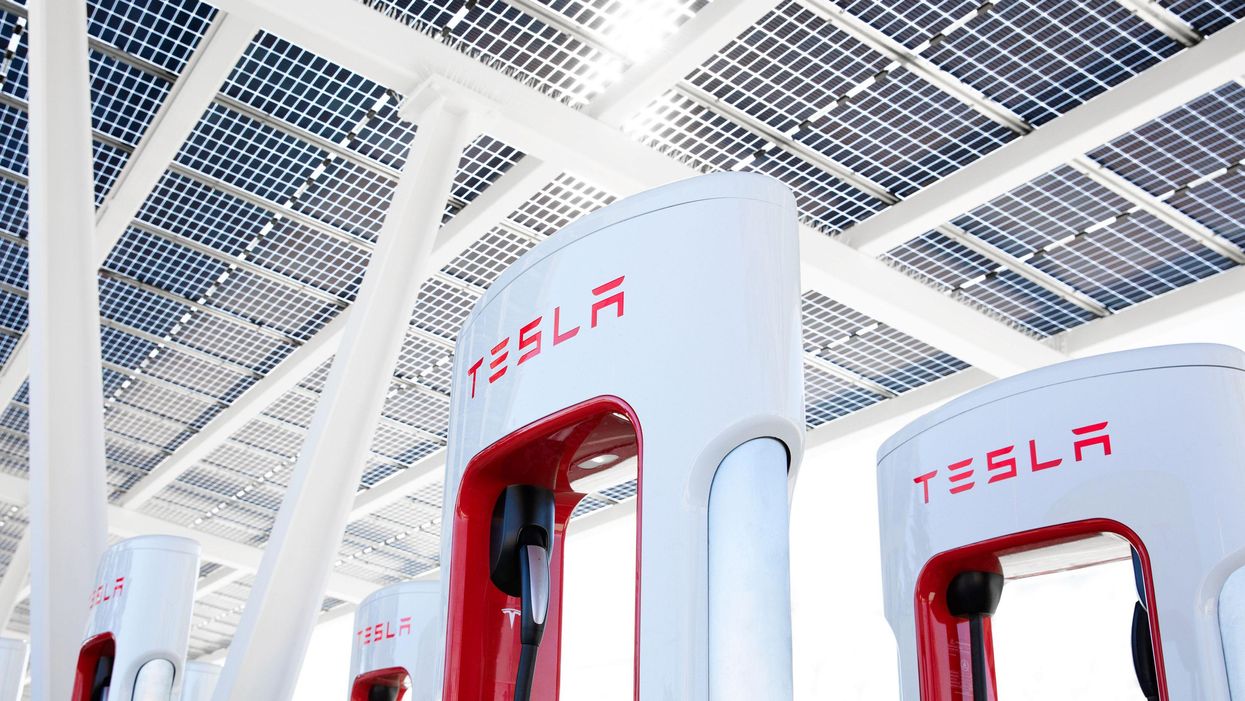 In Elon Musk's perfect world—at least a perfect planet Earth—every last driver will switch from fossil fuels to EVs. But even as his company tops the $1 trillion mark in valuation, Musk sees the conundrum: The mass adoption of EVs demands a truly public network of fast chargers, rather than today's balkanized system. Yet Tesla's proprietary Supercharger network was designed exclusively for Tesla owners, not the people who buy electric Fords, Volkswagens, et al.

That's about to change, beginning with a Tesla pilot project in the Netherlands. And the entire industry is facing up to the essential nature of charger interoperability: the idea that every car must connect with every charger, with zero hassle, just as internal-combustion cars can pull up to most any pump. Further, experts say EV owners must expect to pay less to recharge than they do to fill up with unleaded, regardless of the source or speed of that electricity.

Tesla recently opened 10 Superchargers in the Netherlands to owners of other EVs, accessed via a new mobile app. Naturally, Tesla plans to charge higher electricity prices versus Tesla owners, who after all helped bankroll the network. That follows the company's July promise to expand access to its global Supercharging network, now 25,000 strong. For its own customers, Teslas sold in Europe have already adopted the CCS plug standard, rather than Tesla's proprietary connector found in America and elsewhere. Tesla has also begun selling CCS adapters in South Korea, and has promised to "soon" bring those roughly $250 adapters to America.

Some Tesla owners are grinding their teeth over the idea of sharing their precious Superchargers, especially if it means waiting in line behind some Chevy. But experts say Tesla, having invested the money to pioneer a fast-charging network, must now find a way to make that network profitable, without alienating Tesla owners. That's been a daunting challenge for the plug-in industry at large, which pays often-exorbitant utility rates for DC power-on-demand, even as chargers sit idle for long periods.

According to one estimate, fast-charging stations must operate for at least eight hours a day—a utilization rate above 30 percent—to turn a penny of profit. No one, not even Tesla, has come close.

Chris Nelder, host of The Energy Transition Show podcast, and former manager of carbon-free mobility at the Rocky Mountain Institute, estimates that providers need to see DC fast-charging stations operating for at least eight hours a day—a utilization rate above 30 percent—to turn a penny of profit. No one, not even Tesla, has come close.

"Death for Tesla would be customers having to queue up at their chargers," Nelder says. "But they need to find a sweet spot between not having to queue, and still getting enough revenue to not get killed on utility demand charges and maintenance."

The physical plug interface isn't the only automotive version of Beta vs. VHS. A report from the Electric Power Research Institute (EPRI) outlines major challenges in harmonizing every aspect of juice bars for cars: Stations, networks, vehicles and the grid itself. In the United States, the report cites a need for roughly 1 million public or semi-public charging ports by 2030, to support nearly 19 million EVs. Today, there are fewer than 100,000, many limited in access and use. The report calls for adoption of the Open Charge Point Protocol (OCPP)—more common in Europe, beginning to gain traction in the U.S.—to achieve that goal.

In my own extensive EV testing, I continue to be stymied or frustrated by apps, subscriptions and connected credit cards from multiple automakers or vendors, such as ChargePoint, Electrify America and EVGo. It's akin to needing a separate subscription and payment plan, depending on whether one pulls into a Mobil, Shell or BP station. Even worse is stations that are out-of-service or won't communicate with the car I'm driving, via a digital handshake through the plug cable. To Tesla's credit, I've never failed to hook up successfully to a Supercharger, in America or Europe. While Tesla fans harp on that point, they almost never acknowledge that Musk's outfit has it easier, because its current network must only be compatible with four cars: The Model 3, S, Y and X.

If the U.S. is to have 19 million EVs by 2030, there will need to be 1 million public or semi-public charging ports. Today there are fewer than 100,000—many limited in access and use.

Here, the institute report is spot-on regarding EV service providers (EVSP's) and the lack of interoperability:

EVSP's tend to operate their respective networks as islands, lacking communication or integration with other networks. In the current industry vernacular, interoperability most often refers to a vision in which EV drivers can access public charge points from any owner/operator through a common platform and a single network subscription or contract, often called "e-roaming." Several EVSP networks have signed bilateral agreements to implement roaming partnerships in the past year.

California gamely attempted to address one issue by requiring public chargers to offer a credit-card reader. Nelder says that created another challenge, adding costs to manufacturers to integrate and maintain card readers that often conk out with exposure to the elements. Most providers also charge higher "convenience" rates to drivers who don't have a network subscription—sometimes exceeding the price of gasoline—which blunts the advantage of EV energy efficiency. Again, imagine Mobil charging more per-gallon for drivers who aren't part of its ecosystem. In California, where home electricity averages about 22 cents per kilowatt-hour, Electrify America charges 31 cents per kWh for "Pass +" members (plus $4 per month) for access to DC fast charging; but 43 cents per kWh for guests and basic members, a premium of nearly 40 percent. After a 10-minute grace period following completion of a charge, users pay an "idling fee" of 40 cents per kWh.

It remains to be seen what Tesla intends to charge drivers of rival brands; certainly, Musk is right to charge some premium for Supercharger access, at least initially. But if Tesla tries to soak owners of other EVs, those drivers will avoid Superchargers, and Musk's goal of selling energy becomes shakier. Either way, unpredictable pricing and fragmented networks can't be good for EV adoption.

Ultimately, Nelder says, the answer is to do away with apps and subscriptions entirely, and have every car communicate directly with every network and station via a simple digital handshake.

"The future we need to get to is plug-and-play, where every car has a unique ID and account associated with it," Nelder said, as with toll readers on highways.

Neither Tesla nor its rivals have moved beyond apps, but convenience does seem to improve with every model year. The FordPass Charging Network gives owners—including of the Mustang Mach E and next year's eagerly awaited F-150 Lightning pickup—roaming access to 12,000 charging stations and 35,000 plugs, including from the Electrify America network. Ford touts a hassle-free experience that will make "public chargers as common as some of the most popular pharmacy or coffee chains." The automaker is also looking to boost roaming via partnerships with other networks.

When I plugged both a Mach-E and Volkswagen ID.4 into a 150-kilowatt Electrify America unit, on separate visits to a Target parking lot in suburban New Jersey, the station screen automatically identified the cars by model, initiated a charging session and debited a linked credit card for payment. But car models don't always communicate smoothly: On the glorious day that Tesla offers Supercharger hook-ups to rival models, those cars will need proper software to establish the connection. That also requires coding and other cooperation from Tesla's side, including the question of which company's customer-facing app will do the job.

In America, and to a lesser extent in Europe, the government has largely left all these issues to the private sector, with predictably mixed or self-serving results. (President Bidens' newly passed, $1.2 trillion infrastructure bill may provide a mild helping hand, with $7.5 billion set aside for EV chargers). As they vie with Tesla's industry-topping network, some U.S. charging solutions have sprung directly from the petroleum and internal-combustion economy: Electrify America's fast-growing network is funded via Volkswagen's $2 billion settlement with the U.S. and California over its diesel emissions cheating scandal. Greenlots has been acquired by Royal Dutch Shell, and combined with Europe's NewMotion, is changing its name to Shell Recharge Solutions. The rebranded umbrella company promises to expand to 500,000 charging stations around the world by 2025, up from 60,000 today, including via roaming agreements with existing networks. Shell has also announced a goal of becoming the leading global player in EV replenishment.

Shell, by the way, currently serves about 30 million gasoline customers a day at some 46,000 retail stations. To compete with all those pumps-and-pumpers, and eventually force them to run dry, electric purveyors had better hurry. The International Energy Administration expects the world's population of plug-in cars to grow from 10 million today to 125 million by 2030. President Biden's executive order targets 50 percent of all new cars to be EVs by that year. But without a charger rollout on a breathtaking scale—especially chargers that can share-and-share alike—such ambitious targets may be a pipe dream.