California utility Pacific Gas & Electric may need to rely even more heavily on forced blackouts this year, to prevent its grid from starting more deadly wildfires like the ones that drove it into bankruptcy.

PG&E’s wildfire mitigation work is well behind schedule, according to data released last week as part of its first-quarter earnings report. That work includes grid hardening, vegetation clearing, physical inspections, and installation specialized gear on its distribution and transmission system.

Meanwhile, the inspections that PG&E has done in the past year have come under fire from U.S. District Court Judge William Alsup, who last week ordered the utility to adhere to much more stringent processes for inspecting its power lines. Alsup’s order described PG&E’s reports on its work to date as a “mere courtroom prop,” concealing failures to trim trees clearly in danger of striking distribution lines, or to replace worn equipment on high-voltage transmission towers.

But the judge's orders to expand PG&E’s inspection workforce come at an extraordinary time. The coronavirus pandemic  is causing problems for fire-prevention and utility work statewide.

For PG&E, COVID-19 restrictions and economic disruptions “will continue to result in workforce disruptions, both in personnel availability (including a reduction in contract labor resources) and deployment,” the utility wrote in a filing.

Making matters worse, northern California’s meager rain and snowfall this winter and spring could lead to a fire season that’s more dangerous and begins earlier than last year. That leaves PG&E little time to catch up on its work.

It also increases the possibility that many of its customers will still be confined to their homes under coronavirus restrictions, depending on the state’s reopening plans and the course of the pandemic over the coming months, said Michael Wara, the head of Stanford University’s Climate and Energy Policy Program and a member of Gov. Gavin Newsom’s Wildfires Blue Ribbon Commission.

That could complicate plans to help elderly or medically vulnerable people who face hardship or even death without power by bringing them to generator-powered community shelter sites, or to quickly deploy the field crews needed to meet California regulators’ demands for this year’s power shutoffs to last no more than 24 hours, Wara said in an interview this week.

“My question, looking at this data, is whether PG&E is clearly communicating with the state, with local governments, with the [state] Office of Emergency Services, and with CALFIRE,” the state firefighting agency, “in terms of how the pandemic is going to affect operations,” Wara said. “I’m hopeful, but I’m concerned.”

PG&E did not provide an immediate response to a request for comment this week.

PG&E has incurred about $2.6 billion in costs for its 2019 wildfire mitigation work, and expects to incur another $2.7 billion this year. But the utility revealed last week that the roughly $700 million it has spent so far this year has made only a slight dent in its backlog.

As of March 31, PG&E had only completed 32 percent of its planned tree trimming and removal along 1,800 miles of distribution lines, and only 19 percent of its work to replace poles and cover or bury bare wires along 241 miles of lines.

PG&E is also behind on technology to better predict and pinpoint parts of the grid under highest fire threat. At the end of March, it had only installed 16 percent of the 592 grid sectionalizing devices it will use to isolate and minimize power outages, and deployed fewer than one in 10 of the 400 weather stations to measure wind speeds and humidity, and 200 high-definition cameras for spotting broken equipment or fires as they’re happening.

The only portion of its wildfire plan where PG&E is ahead of schedule is in acquiring emergency backup generators for communities at highest risk of having their power cut off for days at a time — 450 megawatts of them, compared to the 300 megawatts it planned for. 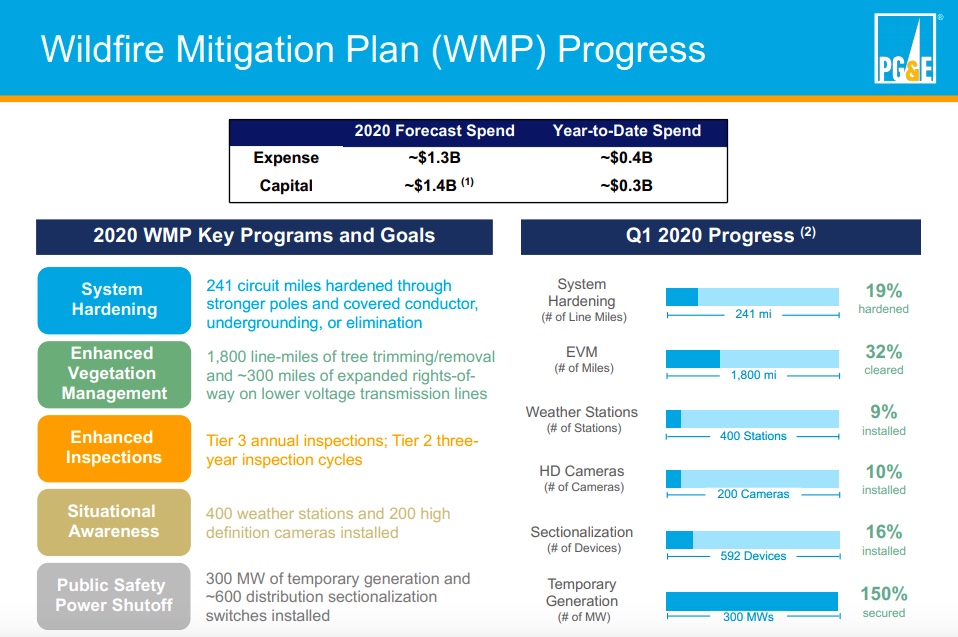 Wara pointed out that it’s harder for PG&E to do work in the first quarter, given that winter conditions can prevent work from happening across much of its mountainous and forested territory at higher wildfire risk. “On the other hand, we had an extraordinarily mild winter this year,” with far lower snowfall than usual in the Sierra Nevada, which has also increased wildfire risk expectations for this year.

This difference in weather from last year to this year could make it difficult for PG&E to reduce the scope of its fire-prevention blackouts this year, Wara said.

In its Q1 presentation, PG&E stated that its backup generators, grid sectionalizing and transmission line repairs and distribution line inspections it’s done should reduce the number of customers affected by blackouts by about one-third — but there's a big caveat. The reduction in blackouts would come only “if the exact same weather patterns are seen in 2020 as experienced during the largest PSPS events in 2019.”

That's "significant," Wara said. "Last fire season was a pretty light fire season, and it had a very late start. We’re now headed into a fire season that’s likely to be much more severe, and with an earlier start.”

PG&E’s preparedness for wildfire mitigation was brought further into doubt in last week’s order from Judge Alsup, who oversees the utility’s criminal probation for convictions related to the deadly 2010 San Bruno natural gas pipeline explosion. Alsup’s order (PDF) flatly states that “PG&E remains years away from compliance with California law and with its own wildfire mitigation plan.”

Alsup ordered PG&E to put its own employees to work alongside subcontractors to get the work done more quickly.

Inspections in 2019 may also be suspect, Alsup wrote. Last year, a 230kV transmission line in Sonoma County was cleared in three separate PG&E inspections, “once by drone, once by climbing, and once by ground” crews. But during an October windstorm, a jumper cable that routes power flow around a transmission tower broke loose, a failure that's suspected of causing the Oct. 2019 Kincade fire.

That 230kV line remained energized amidst a broader de-energization of lower-voltage transmission and distribution systems in the area. CAL FIRE hasn't announced the fire’s cause, but PG&E's Q1 noted it has set aside $600 million in anticipation of covering damages it caused — a figure at “the lower end of the range” of potential losses.

“Like a broken record, PG&E routinely excuses itself by insisting that all towers had been inspected and any noted faults were addressed,” Alsup wrote. “But these transmission tower inspections failed to spot dangerous conditions.” He ordered PG&E to record the age and specific condition of inspected transmisison equipment, videotape every inspection, and require all contractors doing the work to carry insurance to cover public losses in event of a wildfire.

PG&E is under fire to win court approval of its bankruptcy plan by June 30 as a precondition of being allowed to access a $21 billion state wildfire insurance fund considered critical for its future financial stability. But any fires caused by its equipment after its Jan. 2019 bankruptcy filing and before its emergence from bankruptcy, now aimed for the end of August, would not be eligible for being covered under that fund.

This opens the possibility that PG&E may be under pressure to consider de-energizing higher-voltage transmission lines as it responds to windy dry conditions that guide its PSPS decisions this summer and fall, Wara said. “Before the Camp Fire, PG&E didn’t turn off any transmission. After the Camp Fire they turned off the 60 and 115kV in high risk areas — and the Kincade fire ignited.”

“I think the biggest upcoming question for this fire season is what happens with transmission,” he said. “I hope the stringency of the inspections have increased significantly in the past few years, given the errors” described in Alsup’s order, to give PG&E the confidence that it can keep higher-voltage power lines energized during high-wind events.

Doing otherwise “could have a much more systematic impact on generation available for load, on resource adequacy in various parts of the state,” Wara said. “We need to be talking about that, and doing an analysis to make sure we’re OK.”

84 Painfully Accurate Work Memes To Remind You They Definitely Don’t Pay You Enough
May 15, 2022